Cogumelos são consumables that can be gathered from various small ground mushrooms found around the Aberration Map. Much like Berries, these gives mushrooms and fiber, but are only pickable twice. Unlike Berries, most mushrooms only give food (the exception being Aquatic Mushrooms, which generate a small amount of water at the cost of food), and each mushroom has its own unique effects when consumed. Ascerbic mushrooms behave like Narcoberries and can be used in their place when crafting Narcotics. Auric mushrooms behave similar to Stimberry (reducing torpor at the cost of water), but they cannot be used in place of Stimberries when crafting Stimulants. Each mushroom, as a secondary effect, counters one of the unique hazards found within the Aberration Map.

Metal Sickle to efficiently harvest the mushrooms of Aberration.

Each Charge Light Dino prefers specific variant of food as their diet and taming (excluding Plant Z seed, which is what they would eat the most).

* = Does not inflict Torpidity when taming, but will inflict when feeding it.

Across the map, there are various dangerous mushroom types that produces spore, affecting the character with Status Effects.

Mushroom that induce spores can be differentiated by every other mushroom by its slight difference in its appearance. The poisonous variety will give Bio Toxin and Rare Flowers as extra resources during harvesting, both by hand and via a dino.

Staying in effect of the said spores will raise torpidity, even after knocked out, as long as the effect is in place. Effect countdown refreshes continuously until the survivor leaves the spore clouds. 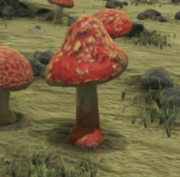 Red Mushrooms appear across the fertile (Green) region of the map as a hand pick-able items.

Poisonous variant of this mushroom can be identified by its red-root on the stem. This variant releases rainbow-colored cloud of Dizzy Spores when approached, causing the survivor to hallucinate with waves of rainbow lines in a trippy trance which causes extremely distortion of vision, constant defecation, and suffocation for 12 seconds.

The hallucination effect causes the survivor to start suffocating within a few seconds after exposure, causing significant loss of health. The 12 second duration is insufficient to cause death on its own, but it can be deadly if the survivor is already injured upon exposure, remains in the effect for some time, or has repeated exposures within a short period of time. The damage dealt by the suffocation effect is a percentage of maximum health, so the spore clouds are equally deadly to high-level survivors as low-level ones. 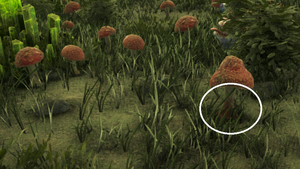 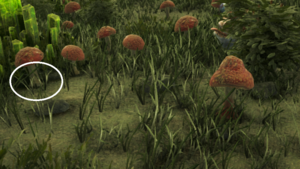 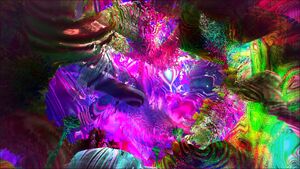 Cold Mushrooms appears across the bioluminescence (Blue) region of the map as a hand-pickable items.

Poisonous variant of this mushroom can be identified by a darker blue coloration in the ring around the bottom of the mushroom. Note that in darker lighting (common in parts of the blue regions), the visual difference between the two can be very difficult to identify at a glance, so caution should be used when approaching any patch of these mushrooms. This variant releases cyan-colored cloud of Freezing Spores when approached, inflicting Hypothermia with rapid health loss (with disregard from hypothermic insulation) for 120 seconds.

This hypothermia will last for the duration of the debuff, and cannot be removed by heat sources. The health loss is relatively slow and generally insufficient to cause death on its own. The torpor gain is rather significant, however, and will result in unconsciousness for the survivor without significant amounts of Fortitude (60 Fortitude is just slightly insufficient to avoid unconsciousness before the end of the effect), though Stimberries or Auric Mushrooms can be consumed to negate the torpor gain at the cost of water. The damage dealt by the freezing effect is a percentage of maximum health, so the spore clouds are equally deadly to high-level survivors as low-level ones. The survivor will also have distorted vision and a strong blue coloration to everything, making navigation and threat identification significantly more difficult for the duration.

The freezing effect can be prevented by consuming Aquatic Mushrooms before contact with the spore cloud, or by wearing a full Hazard Suit. Consuming Aquatic Mushrooms after one is already afflicted will reduce the duration by 5 second per mushroom consumed, at the cost of significant amounts of food. Note that the food drain occurs over a long period of time, and eating normal food will not regenerate food while this drain effect is occurring, so starvation can also be a danger. 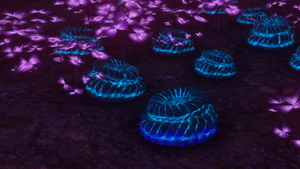 Example showing the two varieties of cold mushrooms. The mushroom closest to the camera is the poisonous version, identifiable by the darker blue ring around the base. 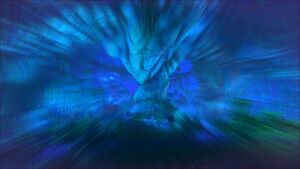 Branched mushroom appears across the element (Red) region of the map regions of the map.

Much like the Fertile variant, poisonous variant of this mushroom can be identified by its red-root on the stem. This variant releases dull brown and purple-colored cloud of Element Spores, which forces constant defecation that results in rapid hunger loss at an alarming rate for 120 seconds. Once inflicted, the food will drop down very rapidly, which makes even Custom Consumable useless in this case.

Unlike the other two spores, this kind of spores are deadly, as there are no other known methods of countering against the spores. Added with the fact the mushrooms are more common around irradiated areas means the survivor should not even be around the area in the first place without full hazard protection.

The draining effect can be prevented by consuming Ascerbic Mushrooms before contact with the spore cloud, or by wearing a full Hazard Suit. Consuming Ascerbic Mushrooms after one is already afflicted will reduce the duration per mushroom consumed. Beware of the torpidity caused by consumption of Ascerbic Mushrooms, however, as they can quickly cause the survivor to fall unconscious (2 is sufficient to knock out a survivor with 0 Fortitude, and 5 will knock out a survivor with 60 Fortitude). The torpor gain can be countered by consuming Stimberries or Auric Mushroom, but this comes at the cost of significant amounts of water, so the survivor should ensure that they have on hand plenty of water sources such as Canteen. 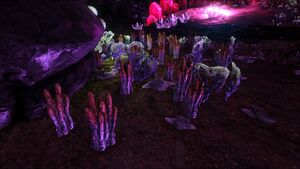 Both types of branched mushroom. The mushroom in the background is the poisonous version. Identifiable by the red base. 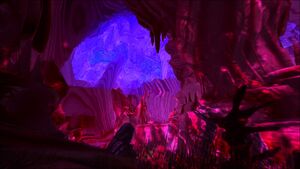